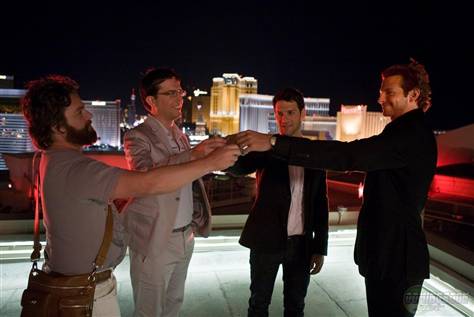 I’m making something clear right here. There are 3 different Las Vegas worlds. There’s the Vegas depicted in movies. There’s the Vegas where couples vacation. And then there’s the Vegas where guys go to party. Sin City. Hell on Earth. Anything goes, for a price. That’s the Vegas I know. But first I’d like to thank Hollywood for glamorizing the place. And I’d also like to thank every guy who has taken their girlfriend to Vegas for a show, a nice dinner, a little pool time, a photogenic trip to the wax museum, some corny couple gambling and a little tipsy Vegas hotel sex. Awww, so romantic! Right? Did I hit it on the head there or what?! You guys just took one for the team. And I applaud you! Because now when you take your boys trip she’ll think Vegas is one way and we all know it’s another way entirely. And trust me ladies, our guys trips to Vegas make that photo montage at the end of The Hangover look like fucking church. But you will never know about it. Because I respect the Bro Code and never take pictures in Vegas. Oh no. So I might be a little vague with some of the things I say in this post as I have to leave out some incriminating stories to avoid many angry texts and phone calls from my boys. Again. Bro Code. Respect.

I think I’ve been to Vegas more than any other vacation destination. Each time has been a guys trip. Even did a bachelor party there. Oh fuck. Yeah. That time. Let’s just say now I will never have my bachelor party there when I finally get married. When I’m 70. Each trip I’ve met some great women there. It’s true surprisingly. I met a hot latina that still stays in touch. A stripper that looked like a young, skinny, dark-haired Jessica Simpson. And an Angelina Jolie clone at the Hard Rock where we did shots with Mr. Seaver from Growing Pains and his then non-famous son Robin Thicke. I’ve also partied with Ghostface Killa from the Wu-Tang Clan and a bunch of his video hos while wearing his spinning Wu medallion at Ghost Bar. Classic Ghostface! One time I was so drunk I tried to throw my shot into the air at Rain as those flames that drop down above your head to start a fire. Just because. And then there was that time I won thousands of dollars playing blackjack and was treated like Mr. Papagiorgio everywhere I went. Good times. I was tipping people like Jim Carrey in Dumb & Dumber. I was so young. And stupid. And drunk. I definitely paid for some stripper’s kid’s first year in college. Ok maybe a community college. But still. Vegas is also the birthplace of Nasty T. My most evil persona. But I can’t say why here. Sorry. One trip to Vegas I golfed for the first time in 120 degree desert heat. Hungover. “Oh it’s a dry heat though.” All that shit means is instead of sweating it out your ass bakes to death on the inside. Every Vegas trip also includes me saying to total strangers “You know what Wesley says right? Always bet on black. Passenger 57 bitches!” every time I hit the roulette table. But nothing is better than when we first go to the blackjack table as a group and I pull my Austin Powers and introduce myself as Richie Cunningham and my bro-in-law as my wife Oprah. Followed by a classic “I’ll stay. I too like to live dangerously.” after the dealer deals me a 5. Ah Vegas.

In between the gambling, clubbing, celebrities, strippers and recovery by the pool time, there’s a lot of other shit that goes down. Like drinking red bull & vodka until it replaces all of the blood in your body. Fucking place has no clocks and if you do that Thursday through Sunday guys trip, you’re running on that shit after the initial adrenaline rush and testosterone subsides after getting zero sleep! And then there’s steak & eggs. In Vegas no matter where you are, no matter what time it is, you can always get some steak & eggs. Swear to God. On a guys trip there aren’t many fancy dinners. We’ll probably do one nice dinner as a group maybe on the first night. After that we all end up on different eating, sleeping, banging and shitting schedules. Seriously. At that point you eat whenever, wherever, to feed the machine so you can bust through the wall and rally for more hard living. It’s crazy. I’ve done more damage to my body on those 4 day Vegas runs that I’ll never be able to repair. Ever. Because that’s what you do in Vegas. That’s what I do in Vegas. I enjoy Vegas because of what I can do there that I can’t do anywhere else on the planet. It’s legal! But I love Boston the best.