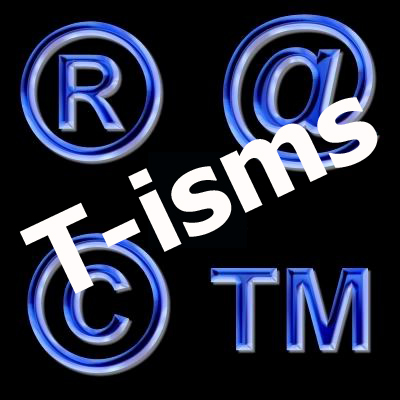 Some people say I have a way with words. And I’m not just talking about my writing. I’m talking about my talking. My passion. My habits. My originality! I’m Italian. I love to talk. I’m from Boston. I have an opinion. And I say things a certain way. You remember this post? But I also have sayings. Things I say all the time. If you hang out with me for a night you would hear a lot of things you’ve never heard before come out of my mouth. Mostly original. Some familiar but with a T twist to them. Here are some of my long running and popular sayings. Which I dubbed “T-isms”.

I will cut you.-One of my favorites. Not used as often these days.
When somebody pisses me off I often find myself saying this to the person. Or to my buddies who have to calm me down. Because when I start talking about cutting somebody, somebody just might get cut. And I don’t even have a knife on me! That’s the funny part. It’s a representation really. Of what I might do. Because my closest people know I’m capable of almost anything! So at this point in the night, if somebody is pissing me off and I’m talking about cutting somebody, STOP GIVING ME SHOTS!!!

I said/wrote that. Steal it and I’ll sue.-Used way too often!
The things I say. The things I write. I talk. I text. I tweet. I facebook update. All original T copyrighted material. And SOOO many people rip off my shit without giving me credit. All the damn time. I constantly hear people using my jokes. Telling my stories as if they are their own. Saying my sayings. Using my facebook updates as their fucking own! I don’t mind people using my material. But quote the original source fucker! And that’s T!!! So sometimes I have to write or say “I said/wrote that. Steal it and I’ll sue.” after I put something out there just to let people know. Fucking crooks.

Slampig.-I avoid them now. But they’re still out there! Lurking.
I did not create this. I don’t know who did. Or when. All I know is, this word has been around East Boston for generations. Since it was Noddles Island I think. It describes a dirty chick who banged a bunch of dudes but is still hot looking and easily bangable. She’s a slampig. Used it all the time as a kid and teenager. Everybody from Eastie did. As an adult. With an education. With a good career. With a business. With nice things. I still use it. I brought it into my adult awesome Boston biz life vernacular. And I introduced it to a new group of friends and biz contacts. A new audience. A new world. And I’m damn proud of it.

My spots.-Almost every time I talk about some place I’ve been to more than once.
I frequent many bars, clubs, lounges, restaurants, gyms, movie theaters, businesses….whatever. Wherever I go, often, that place is my spot. I call it my spot. It’s my spot. Not your spot. My spot. Get your own damn spots. Just not my spots. Ok? Good. And once you have a spot of your own, don’t call it your damn spot either. Call it your joint. Or your place. Or your stripe. I don’t give a fuck what you call it! Just don’t use “my spot”. I will cut you.

Stop it.-Too often! Too many people talking about nonsense.
In the middle of a conversation if I start to realize you are making no sense or you are a complete fucking idiot, I will calmly close my eyes, wave my hand and say “Stop it.” And that’s it. Nothing else. Conversation over. Stop talking now.

Eye fucking the shit out of me.-Every time I’m drinking. Doesn’t matter. Every time.
Yes this is from the great comedy classic “Wedding Crashers”. But ever since this great quotable movie came out in 2005, I have embraced this one quote in particular. So much so that 99 out of 100 times when I’m out drinking with my boys you will hear it come out of my mouth even if a chick looked at me for a millisecond. Yep. I don’t care. If you’re a hot chick and you look my way then you are absolutely eye fucking the shit out of me. Seriously. I don’t care if Brad Pitt is standing next to me. I don’t care if your favorite shitty episode of Sex and the City is on the tv behind me. You look, then you’re eye fucking me! Period. For some reason though, fewer girls eye fuck the shit out of me when I’m sober. Weird.

Pun intended.-Mostly when I’m doing anything t-blawg related.
I pride myself on puns. On one liners. On sexual innuendo. On making people laugh. Whether you’re laughing at me or with me, if I like you, then that makes me happy. Sometimes I have to reiterate myself by saying pun intended. It’s the opposite of those people who always feel compelled to say “no pun intended”. That shit is weird! And stupid. All my puns are intended. As they should be.

“This” (Ex. “This chick was like….” “This dude right here….”. “This asshole said…” “This ‘anything really’”)-Ever since I was able to tell a story. Since I was 2 years-old I guess?!
When I’m telling a story to someone I always use “this” a lot to help. It adds to the effect. Between my energy, the accent and crazy Italian arms flailing like a maniac, it makes for a great show. For example, this is a story you might hear me tell. “I was out the other night with this chick right? I mean this chick was hot. And interesting. For a change right? We were having a good time until this douchebag bartender spills a drink across the bar onto her dress. This girl goes fucking nuts! She starts talking  about how this dress she was wearing cost her like $500. So I say ‘This shit didn’t cost you no $500! Stop it.’” Night over.

Trimming The Fat.-I still trim. But not as much. Thankfully.
I coined this last year when I cleaned out my life. I got rid of every negative person. Every pain in the ass drama causing chick. Cut off every friend and family member who did not contribute to my life in any way when times were tough. I trimmed the fat. And I now say that every time I want to get something or someone out of my life that is not on the T bandwagon. That’s what that is all about baby!

I Put the F-U in FUN.-I put it in. Wait…what?
Come onnnnn! Who else would say something like this but me?! Doesn’t sound right if anyone else says it.

Nicknames. I give everybody nicknames.-I find myself giving people nicknames out loud. And in my head. It’s scary.
Growing up everybody had a nickname. Sometimes they made sense. Sometimes they didn’t. Sometimes you liked them. Sometimes you didn’t. As a grown man in his 30s, I still give everybody a nickname. Friends, chicks, co-workers, strangers, biz contacts….it doesn’t matter. I give people nicknames. I don’t care if you don’t like it. I will call you that nickname whenever the hell I want. And the more you fight your nickname of “Assholeface”, the more I am going to call you “Assholeface”! Out in public. Around hot chicks. At the gym. During a conference call. At Christmas dinner in front of your grandmother. Ok Assholeface?!

So there you have some of my long running sayings. T-isms. Those who know me well, know all of these T-isms. Those who don’t, hang out with me sometime. We’ll go to one of my spots. You’ll get to know them all pretty well too. Then I’ll give you a nickname. If you don’t like it? Stop it. Pun intended. This slampig right here is eye fucking the shit out of me. Holla!!! 😉

Do you have isms??? What do you say or do that nobody else does? That is entertaining? That are constantly taken from your own awesomeness?! Share here. Or on The Twitter. Or on The Facebook.