This week is my cousin’s birthday. Yes, THAT cousin. My right hand man. My partner in crime. My best friend. My brother. You have read about him countless times on this site and with his milestone birthday this week I thought it was about time he got his own special T-pisode. I can’t do the man and our relationship justice in 3 paragraphs but I’ll attempt to put some words together and come up with a decent tribute to the man. And believe me, he is without a doubt one of the greatest men I have ever known. There are 3 men I know I can always depend on no matter what. This guy, my bro-in-law and my closest Eastie buddy. But there isn’t anyone on this entire planet that has had my back like him. Whether I was right or wrong. Bad or good. And that means the fucking world to me.

My cousin is two years younger than me and we’ve been best friends since his birth. We were in diapers together. We went to different schools growing up but that never stopped us from seeing each other or talking on the phone every day. He was the skinny punk kid. I was the chubby crazy kid. He started fights. I ended them. He wanted to talk to girls. I wanted to blow things up. He would say something offensive then I would say something even worse. But underneath it all, we were essentially the same person. We grew up hard and fast, relying on each other for answers and when one of us couldn’t solve the problem, the other one did. We fought entire groups of Eastie kids together. We fought entire boys clubs together. We fought entire school dances together. We fought gangs together. We fought entire college frat houses together. We made our bones in Boston. Hell we even made our bones in New York City. The two of us took on the world and survived. Then we grew up. We stopped hustling for money and went legit. Between the two of us we probably worked like 6 jobs at any given time. We put ourselves through college. We started at the bottom rung of the corporate America ladder together and climbed our way to the top. We still both have our hustle outside of our “day” jobs and we both still believe in those hustles even when we doubt ourselves. We share that unmatched ambition. I watched him grow up and marry the woman of his dreams. I stood beside him on his wedding day as his best man. His wife became my family and I tatted the birthday card on my arm that they gave me asking me to be their first daughter’s godfather. I watched him build a home. Create a family. I was by his side when family members left. But I would never leave and I know he’ll always be there for me. We both can run a conversation and hold an audience with our story telling abilities. Don’t get us going! But when we talk about anything alone together, the world pauses for a minute. Because the two of us are getting our shit together. And then we’re good again. And then we can take on the world again. Today, this punk Eastie kid is on school boards. He teaches rooms full of people how to sell. He inspires people with his Facebook updates. His kids look at him like he is the greatest dad in the world. Because he is. He is my idol. And I know I’ll be lucky to be half the man, dad and husband he is someday.

The world doesn’t have many stand up, honest, hard-working, ambitious men in it. It really doesn’t. The way we grew up we both know we should either be dead or in jail. But we push each other today to be better men than we were yesterday. Sometimes I think he pushes me way more than I push him. He is a good man. No, he is a great man. And on this milestone birthday he deserves to be celebrated and appreciated for a life lived that no one really expected for him. Except for me. I always knew he would be great. So I say to you my brother, happy birthday and thank you for being you because my life would be boring as shit without you in it. You didn’t raise the bar. You are the fucking bar. Enjoy your day. It is well deserved. This is YOUR T-pisode. Today it is a “Stam-pisode.” 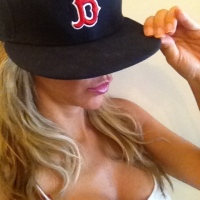